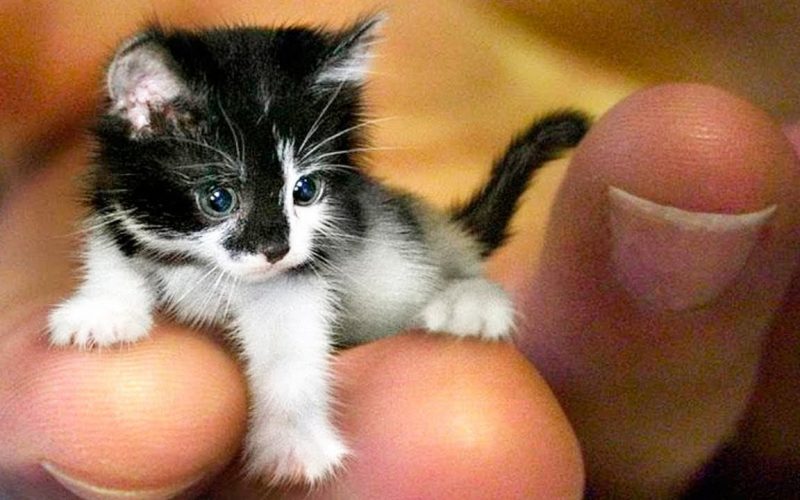 THE SMALLEST CATS In The World

Meet the smallest cats in the world. If you like cats, then these small and cute versions will enchant you.

Here is the list of the smallest cats in the world.

-Lilieput
Lilieput won the title of the smallest cat in the world from the Guinness World Records in October 19th 2013, surpassing Fizz Girl.

-Cye
In 2014, the adorable Cye won the title of the smallest domestic cat in the world by the Guinness World Record. She was born in Ontario, Canada and is a munchkin.

-Mr. Peebles
This was a cat that when it was 2 years old, it measured 6,1 inches tall and 19,2 inches long. This because a genetic malfunction that stopped its growing at a very early age.

-Bitsy
This little cat weighs 1.5 pounds and measures 6.5 inches in length. It was born in Florida and its owner is Auriette Lindsey, who wanted her little cat to win the title of the smallest cat in the world.

-Itse Bitse
This little cat won the title of the smallest cat in the world given by the Guinness World record in November, 2003.

-Pete
This is one of the smallest dwarf cats registered until now with another nameless cat born in 1983.

-Fizz-Girl
It won the title of the smallest domestic cat in the Guinness World record in the year 2012 thanks to its 6 inches tall.

-Pixel
This is another Munchkin cat is recognized by its little size and that also belongs to the Californian cat breeder Tiffani Kjeldergaard (Fizz Girl’s owner).

-Tinker toy
This is, officially, the smallest cat in the world because it appears in the Guinness World Record book This Blue point Himalayan-Persian cat was born in December 25th, 1990 in Illinois, United States.

Trend Max is an education and entertainment channel dedicated to creating interesting Tops, Lists and more. Do not miss a single video SUBSCRIBE NOW.

This website uses cookies to improve your experience while you navigate through the website. Out of these cookies, the cookies that are categorized as necessary are stored on your browser as they are essential for the working of basic functionalities of the website. We also use third-party cookies that help us analyze and understand how you use this website. These cookies will be stored in your browser only with your consent. You also have the option to opt-out of these cookies. But opting out of some of these cookies may have an effect on your browsing experience.
Necessary Always Enabled
Necessary cookies are absolutely essential for the website to function properly. This category only includes cookies that ensures basic functionalities and security features of the website. These cookies do not store any personal information.
Non-necessary
Any cookies that may not be particularly necessary for the website to function and is used specifically to collect user personal data via analytics, ads, other embedded contents are termed as non-necessary cookies. It is mandatory to procure user consent prior to running these cookies on your website.
SAVE & ACCEPT